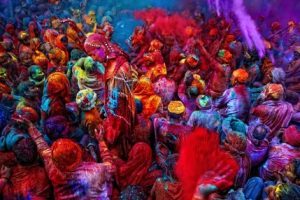 India, the ancient land of the oldest civilizations, traditions and cultures of the world, is home to a number of hues of history, religion and architecture. Experience the top 10 colourful places in India with family tourists.

India is called incredible because it is not restricted to a certain kind of heritage. Its beauty lies in its diversity and the spirit of acceptance.

India possesses numerous sites and monuments which present to the visitor different shades of life. Get Explore Incredible India which are desires to glorious tourist attractions.

Here are top 10 amazing and most colourful places of Incredible India:

One of the most symbolic and iconic places of India are the Ghats situated in Banaras (also called Kashi and Varanasi). These form an important part of the Indian cinema, popular culture and literature. There are 88 Ghats in Banaras situated on the banks of river Ganga. The Ghats are riverfront steps to the sacred river and most of them are sites for worship ceremonies.

The grandeur of these Ghats is enhanced two-fold when they are lit with the lamps of these ceremonies. The atmosphere becomes surreal with the hues and reflections of different lights appearing and hymns are chanted at the Ghats, mainly on the Dashashwameth Ghat in the Aarti of Hindu Gods. Many tourists from around the world visit Varanasi just to feel the scenic beauty of these Ghats. Boating along the Ghats is also an important attraction for visitors.

Jaipur, the capital of Rajasthan and one of the most vibrant cities of the country is known for its mesmerizing monuments and the pink color associated with it. Jaipur is also called the pink city due to the dominant colour of its building. Jaipur is declared a UNESCO World Heritage site. Some of the main places to visit in Jaipur are Amber Palace, Hawa Mahal, City Palace, Jantar Mantar and Jal Mahal. Every monument in Jaipur is iconic and a treat for the tourist.

One of the most important Hindu pilgrimages is the Meenakshi Temple situated at Madurai, Tamil Nadu on the banks of the Vaigai river. It is dedicated to Meenakshi, an incarnation of Parvati. Goddess Parvati is the wife of Lord Shiva according to Hindu mythology. So, the temple is dedicated to Him as well, under the name of Sundareswaran. The temple is not only a holy place but also a colourful site to be explored.

Holi is one of the most prominent and widely celebrated festivals of India. It is the festival of colours, happiness and freedom. Braj region in the state of Uttar Pradesh comprises mainly Mathura and Vrindavan. Here Holi is celebrated with a unique fervor and enthusiasm. The day of the celebration of Holi seems a surreal scene from a Renaissance painting. Many types of Holi are celebrated in this region, Latth Maar Holi being the most famous.

Also called the “festivals of festivals”, Nagaland’s Hornbill Festival is a glimpse of both Indian and tribal culture. It is celebrated every year from 1st to 10th December. The festival is considered sacred and everybody in the community is obliged to take part in it. The Hornbill festival is a confluence of agriculture, dances and melodies. It is named after Hornbill, a very colourful and big bird found in the region.

The word “colour” is usually associated with flowers.  Uttarakhand, an Indian state boasts of a Valley of Flowers, which is pleasing to the eyes of the beholder. The Valley of Flowers National Park in the state is home to alpine flowers and a large variety of flowers. The valley is also home to a number of endangered species of animals, making it a perfect site for nature lovers and photographers.

The Andaman and Nicobar Islands are an Indian Union Territory situated in the Bay of Bengal. They are a group of over 500 islands with scenic beauty and a number of places to be visited and discovered.  The clear blue-sky rests above the sea beside the green lands of the islands. Scuba diving, paragliding, swimming, motorboat drives are some of the most popular leisure activities on the islands.

Dal lake is a lake in Kashmir and is one of the most well-known lakes of the country. Jammu & Kashmir is a land of beautiful scenery, snowfall, gardens, crafts and lakes. Dal lake is integral to tourism of Kashmir. It is also called the lake of flowers and jewel in the crown of Kashmir. It’s a very prominent and colourful tourist destination for sightseeing.

India is a land of different cultures and traditions. Among these different cultures, the Rajasthani culture stands as unique and exceptionally colourful. The Pushkar Camel Race is organized in Pushkar’s Camel Fair. It’s a festival where camels, horses and cattle are traded and different kinds of races and games are organized for amusement. The annual camel race is an attraction for tourists from around the value.

Situated near the Sukhna Lake, the Rock Garden of Chandigarh is a sculpture garden located in Chandigarh, Punjab. It not only has sculpted rocks as its main attraction but also artificial waterfalls and other sculptures made up of waste materials like plastic bottles and plastic bags. There’s also a Doll Museum in the Rock Garden to amuse people. This makes it a wholesome place to be visited by tourists. We give you a luxurious cab on Rent in Chandigarh with affordable rates.

Hope you have complete information about the Top 10 Colourful Places in India. Read More…