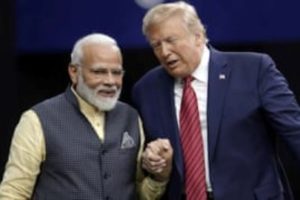 American President Donald Trump is set to visit India on 24 and 25 February 2020. The POTUS will be visiting Ahmedabad and Delhi. A US military aircraft has already been landed in Ahmedabad as a part of the protocol of the American’s President’s security.

The American President has stated that he’s looking forward to his visit to India. He is scheduled to first visit Delhi, the capital of India and then attends an additional public meeting in Ahmedabad at the stadium along with the Indian PM. When asked about whether he’ll sign any trade deal with India, Trump responded by saying,

“They (Indians) want to do something and we’ll see… if we can make the right deal, (we) will do it,”

The First Lady of the US, Melania Trump has also expressed her views regarding her visit by saying she’s “excited” to visit India.

Indian Prime Minister Narendra Modi tweeted on his Twitter handle, “India will give a memorable welcome to our honored guests. The visit is a very special one and will go a long way in further strengthening the India-US friendship. “

Notably, the Government is also receiving criticism for its endeavor to hide the slums of the cities, US President Donald Trump’s Visit to India.

President Trump became the President of the US in 2016 and this year that is, 2020, Presidential Elections will again be held in the US President Donald Trump’s Visit to India. He is a member of the Republican Party of the US.

This will be the first visit of the POTUS to India and is being considered crucial in Indo-US relationships.
The phrase “Namaste Trump” is also trending and catching attention on Social Media.

India’s New Ambassador to the US, Taranjeet Sandhu has also made it clear that Trump’s visit to India will establish a strong rapport between the two leaders and their respective countries. “It also demonstrates their strong desire to take the relationship to new heights,” said Sandhu to PTI.