26th April 2020 Suramya Singh Things To Do In Jaipur 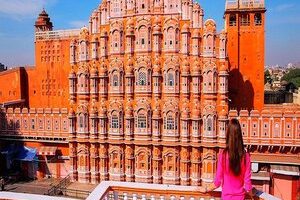 The state of Rajasthan situated in Western India is the symbol of the rich cultural heritage of the country. Jaipur, the capital city of Rajasthan is a glimpse of the state as well as the entire Indian culture. Also known as the “Pink City” around the world. Jaipur offers a number of sites both to behold and discover the Top 10 Tourist Places in Jaipur.

The very fact that the whole city was declared a UNESCO World Heritage Site in July 2019, says a lot about the plethora of gifts Jaipur has in store for a traveler who wants to see the Top 10 Tourist Places in Jaipur. The city perfectly suits the phrase _”Ye nahi dekha to Kya dekha?”_ (If you have not seen this, then you’ve seen nothing.”) and must be on every tourist’s checklist.

Here we, OWIC Car Rental, have shortlisted (yes, it was pretty tough!) ten things you shouldn’t definitely miss in Jaipur:

Jaipur exhibits a number of “Mahals” of palaces built during the Medieval times. These palaces have an unmatched grandeur reminiscent of the city’s legendary Rajput history. Palaces like Hawa Mahal and City Palace are world-famous sites.

The Hindu religion and tradition are as old as the time. India’s major religion also has some architectural marvels around the country. In Jaipur, one can witness the glory of faith by visiting Birla Mandir, Galtaji, Govind Devji Temple and even Shanghji Jain Temple. These temples are a place of the combination of religion and culture.

Jaipur comprises a number of cultural sites like Jawahar Kala Kendra to peep into the native art and crafts of the city. There is also a government museum in the Hawa Mahal and an art gallery in Viratnagar. Other than these, there are also the City Palace Museum, Albert Hale Museum, Dolls Museum, Jaipur Wax Museum, Anokhi Museum of hand printing, Diwan-e-aam Hall of Public Audience and Gyan Museum.

It will not be an exaggeration at all to say that Rajasthani cuisine is known for its unique taste worldwide. In Jaipur, you shouldn’t miss the dishes like Dal Bati Churma, Mawa Kachori, Mirchi Bada, Ker Sangria and Gate Khichdi. This is just the tip of the iceberg when it comes to the lip-smacking cuisine you can delight your tongue with, in Jaipur.

Our reason to mention the Jal Mahal as a whole separate point is its uniqueness and peculiarities. Jal Mahal (translation: “Water Palace”)is a palace in the middle of the Man Sagar Lake in Jaipur. It is a showcase of Rajputana architecture and is spellbinding, given that this majestic structure is erected right in the middle of a water body.

Jantar Mantar is a collection of 18 architectural astronomical instruments built by the Kachwaha Rajput King Sawai Jai Singh II, the founder of Jaipur. It features the world’s largest stone sundial and it’s a UNESCO World Heritage Site. All these specialties make it a monument not to be missed at all.

The city which inspired some of the greatest artists to write this, also has in its store Isarat, a mesmerizing minaret, built in the 1740s by Jai Singh II’s son Ishwari. This minaret is a structure that engulfs the sight of the viewer and must not be missed at any cost.

Also known as the Amber Fort, Amer Fort is one of the most prominent tourist attractions of the city. The fort is known for its artistic style elements. It has large ramparts and a series of gates and cobbed paths. The fort overlooks the Moata lake. All this taken together makes this piece of history, a complete package to quench one’s wanderlust.

Also called the “Tiger Fort”, this fort was built by Jai Singh II as a medium to fortify and protect the city. The Aravalli Hills, India’s oldest mountain range is in the vicinity of this fort. The fort serves another purpose as well. Other than being a tourist spot in itself, it is also a site from where one can view the splendid hues and beauty.

This fort is also called the “Fort of Victory”. It is made of Red Sandstone and has an Indo-Persian architectural style. It is a self-sufficient palace. It has thick walls and other beautiful palaces. Exhibiting the glimpses of science and technology of the era it was built in, the palace is for sure a wholesome experience for a tourist.